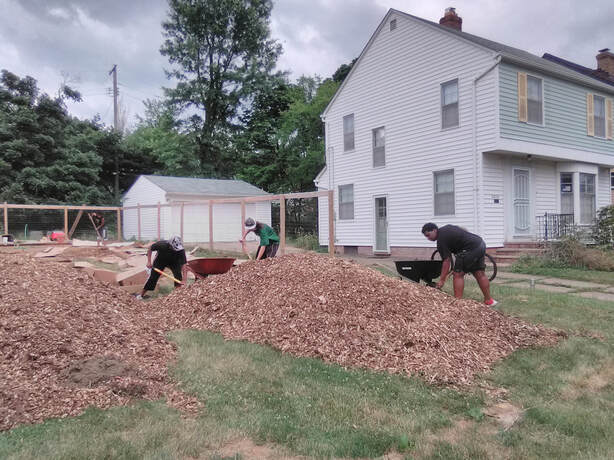 Benham worked with neighbors, including Margaret Lann and Michelle Moehler, to create this green oasis in the Noble Neighborhood. The women brought community volunteers together, including many teens, to layout the orchard site, build raised beds, install plants, and gather funding. Lann orchestrated applications for grant and community funding for supplies, while Moehler designed the orchard’s logo and signage.
Their labors have created a hidden treasure that invites neighbors to enjoy tranquility while sitting in the shade of the trees. The orchard, which opened in September, currently includes six apple trees, four grapevines, three raspberry bushes, and four pawpaw trees.
While many people may not be familiar with the pawpaw, the orchard’s creators thought it important to include it. The pawpaw is Ohio’s only native fruit, and was an important food source for indigenous peoples. Pawpaws are the northernmost member of the mostly tropical custard apple family. The trees bear sweet, edible fruits with a custard-like texture that are high in vitamins, minerals and energy-supplying calories.
Benham and her neighbors have plans to plant cherries, pears, plums, peaches and black raspberries in the spring. The group relies on community funding and volunteers to build raised beds, plant trees and bushes, and maintain the orchard by weeding and watering. “We can always use netting, tools, and shovels, or even someone to water the plants on dry days,” said Benham.
Benham is a master gardener with the Ohio State University Extension Master Gardener Volunteer Program, which provides intensive training in horticulture to interested Ohio residents, who then volunteer their time assisting with educational programs and activities through their local OSU Extension county office.
For more information, or to volunteer, contact Benham at DelmoreOrchard@gmail.com 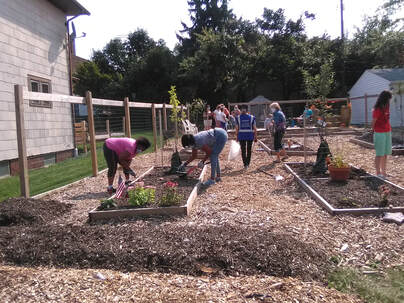 Excerpted from:
Noble's community projects thrive despite pandemic   by Brenda H May

The Delmore Community Orchard has become another neighborhood center. Its open design invites neighbors to sit and enjoy the new growth on the fruit-bearing and pollinator-friendly plants, as well as the flourishing of relationships between neighbors. At the orchard’s open house event in September, neighbors helped plant hundreds of daffodil bulbs. People came from the neighborhood and beyond to donate perennials—including a special effort from the Northeast Ohio Perennial Society—to fill the beds of the “Welcoming Gardens.” Folks from outside the area came to see what so many are talking about—how a city lot-sized orchard could become a community asset. Expectations are high for both a stunning display of color on Delmore Road in the spring, and for growing neighborhood pride.
​
Brenda H. May is one of the Noble Neighbor leaders. Check out their story at NobleNeighbors.com. 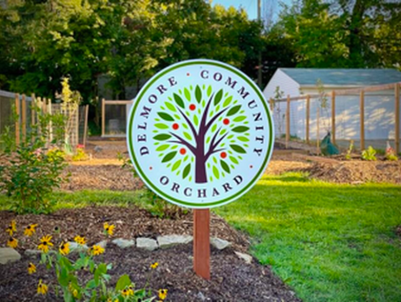 The metamorphosis continues for the Delmore Community Orchard, formerly home to an ill-fated garden that has since been converted to apple trees, blueberry and raspberry bushes, a few grapevines, 300 daffodils, 40 native Ohio pollinator plants and -- for good measure -- a couple of pawpaws, all on a not-so-vacant lot in the Noble neighborhood of Cleveland Heights. Although submitted by organizer Tom Gibson, this photo was actually taken by the sign's designer, Michelle Moehler.

By Thomas Jewell, special to cleveland.com

CLEVELAND HEIGHTS, Ohio -- Beautification and sustainability efforts continue to take root in the Noble neighborhood, where even a pandemic hasn’t turned back the groundswell.

The work started last year with the creation of roughly a dozen “pocket pollinator” gardens along Langton Road. That pilot project led to an offshoot on Northampton Road, where residents kicked in [funds], and a grant from the Frohring Foundation helped provide the rest. “We’ve had a lot of cross-pollination with volunteers reaching a new set of major milestones in our efforts to green the Noble neighborhood,” said organizer Tom Gibson, with Green Paradigm Partners.

Gibson pointed to the work of Barb Sosnowski on Northampton, as did Noble Neighbors leader Brenda May, who also mentioned the separate mini-park project at Roanoke and Noble roads. “Barb and Laura Marks (with Heights Tree People) have been overwhelmed with how many neighbors and passers-by have stopped to thank them for their work transforming this former off-brand gas station vacant lot into an inviting space of beauty,” May said. Meanwhile, when the Noble Gardeners' Market set up shop in August and September, Gibson said he kept hearing about ongoing problems with a community garden on Delmore Road. “There was a heavy wooden fence that was out of city code and upsetting the neighbors,” Gibson said. “And at one point, somebody went in and picked all of the vegetables.” The controversial garden also had its beds overturned and uprooted by vandals back in August 2019. And, through it all, there was the neighbor behind the garden.

A change in plans
Danialle Benham, a special education paraprofessional at Boulevard Elementary School, says she cherishes the rain. She has three rain barrels that can collect up to 150 gallons off her garage roof. When rainwater gets in short supply, she runs her hose over to the garden. At one time she was interested in buying the vacant lot behind her house, but the Cuyahoga County Land Bank only turns them over to the neighbors on either side of the property.
“I got involved on the community garden two summers ago, but I realized that they needed a sustainable, long-term plan,” Benham said. When things really started to fall apart, she offered to take over the project, on one condition: that they turn it into an orchard. And for that, she got the go-ahead in July.
“It turns out we couldn’t have found a better person -- Danialle is a trained orchardist with an outgoing personality,” Gibson noted, adding that the city had been getting extremely distressed over the state of the garden.

City workers took down the out-of-code fence that was then “re-harvested” by Benham, who has a master gardening certificate from Michigan State University, and Gibson’s Green Paradigm Partner Elsa Johnson, who helped with the initial garden design. In addition to six apple trees and blueberry bushes, along with four concord grapevines and raspberry bushes, with a couple of pawpaws thrown in, Benham applied for a grant from the Ohio Sierra Club for 40 native pollinator plants. But for one neighbor, the coup de grace proved to be 300 daffodils. “She said it was the best thing that had happened to the neighborhood, that she was so excited and had been waiting all day for the beautiful daffodils to arrive,” Benham said.

COVID-19 and the workforce
The city also donated 21 cubic yards of wood chips and another 14 cubic yards of leaf humus to the cause. But with pursuits like gardening strongly encouraged during Ohio’s Stay-at-Home order in mid-March, supplies and plants became scarce for the Northampton pollinator project.
“We usually get student workers through the Heights High Environmental Club, but when COVID-19 hit and the schools were closed, I lost my workforce,” Gibson said. Not to worry, as the Noble residents rounded up their own teenage school kids, including two from the Benham household, who were all paid.  And when the grant money ran out, they suddenly became “volunteers.” “Teens on the street have done the heavy lifting of moving wheelbarrows of mulch and the delicate tasks of transplanting pollinator flowers,” May said. “In turn, several neighbors have paid closer attention to their own landscaping and improving the overall look of the street.”
​
As far as May and the Noble Neighbors are concerned, it’s all been worthwhile already. “Danialle Benham’s vision for the orchard-in-the-city is much greater than fruit production,” May said. “She recognizes the potential for the orchard to be a community catalyst and has designed several features to foster cohesion.” This has included removing the front fence and allowing people to freely enter the orchard, which also received a $500 mini-grant from the Future Heights nonprofit organization that serves as one of the city’s community development corporations. In addition, Home Depot has donated a shed to the cause. Benham also thanked Noble designer Michelle Moehler for the creation of a lovely sign for the orchard.